Inflatable kayaks (also: blow up kayak or airkayaks) are gaining more and more popularity recently. Known manufacturers are improving continuously their materials and construction, so that they are not anymore considered as fun boats only. They can be really an alternative to solid kayaks. In the following you are going to learn all about airkayaks, in particular the differences to solid and folding kayaks, the advantages and disadvantages of inflatables and their uses. Whether you consider yourself as beginner, occasional or professional paddler, we present you the right inflatable kayaks at the end.

What is an inflatable kayak?

A kayak is a slim designed paddle boat, which is navigated with a double-blade paddle. Traditional kayaks are covered by a deck that prevents the entry of spray water or waves. The paddler is sitting in driving direction. Kayaks are fast and very maoeuvrable paddle boats that has been originally used by Eskimos in Greenlandic for hunting. Thanks to these characteristics kayaks are widely used in water sports and for touring nowadays. Therefore, kayaks are perfect for anyone who likes to paddle fast and to make long distances.

Inflatable kayaks are also called airkayaks, which are usually made of PVC or a woven fabric coated in rubber. In their first years, the kayak community didn’t take them really seriously since they were quite vulnerable to damage and their driving characteristics were not comparable to a hard shell kayak. But a lot has been changed since then and they are quite popular for white water and touring. Only race is still a dedicated area for hard shell kayaks.

For an inflatable an air pump is used to inflate air into the air chambers of the boat. Depending on the material used for the kayak, it is possible to inflate more or less air into the chambers, which has an impact on the operating pressure. The more pressure the air chamber has, the better its and stiffness and driving characteristics. Kayaks with a high operating pressure are mostly the ones that can be found in the higher priced segment.

The big advantage of a blow up kayak is that it can be easily transported in a backpack. So, you can take it with you anywhere you want.

There are different types of kayaks and each one has its preferable areas of use. In general there are the four following categories:

The purpose of recreational kayaks is to have fun on the water. Most people start with a recreational kayak because there is no paddle experience required. The technique is really easy and everybody knows to paddle straight away. They are usually wide and therefore very stable and the probability to capsize is much lower than with any other kayak types. This kind of kayaks is also widely used at rental stations. In coast areas you are more likely to find Sit-on-Top where you don’t sit in the kayak but on the boat.

The most affordable kayaks you can find among the recreational kayaks. They are designed for calm water and short relaxing tours in the nature. Therefore, they are not made for long distances or sporting tours. These kayaks are perfect for beginners who prefer only paddling from time to time and to rather relax in the boat. 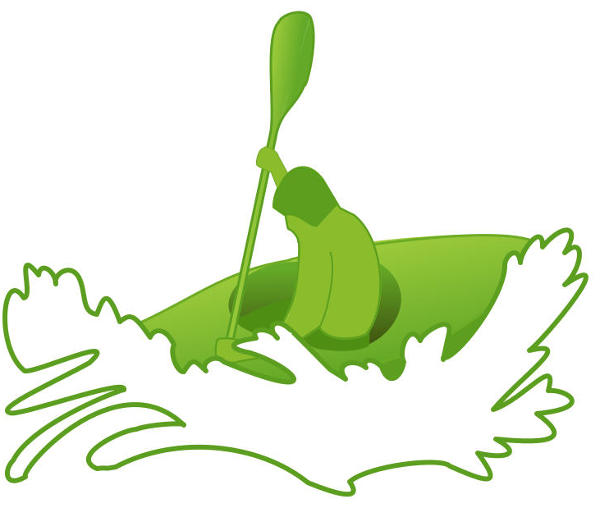 Typical white water kayaks can be easily recognized by their significant shape. They are wide and quite short compared to typical kayaks in order to have the best stability and manoeuvrability on the water. They are only used on white water rivers because due to their construction they are really slow to paddle. As Whitewater kayaker, speed is not the primary concern, but rather navigation through rapids. That’s why a really good paddle technique is necessary, which has to be learned.

White water is definitely not an area of use for entry-level kayaks. Cheap entry-level kayaks can be even dangerous on white water because most of them are just made of a thin PVC boat skin. Sharp rockets and obstacles can easily break through the boat skin and put the kayaker in danger. However, it doesn’t mean that inflatable can’t be used for white water kayaking. High-quality kayaks are not only very stable and manoeuvrable but as well as very robust.

Ambitious beginners make often their first steps with an inflatable touring kayak. Touring kayaks are made for long distances on lakes, rivers or near coast areas. They are quite long which results in a good speed on water. Most of them are still wide enough for a good stability and offer enough space for luggage. A subcategory of touring kayaks are sea kayaks. Thanks to their longer and slim shape they are ideal for sea conditions like strong waves and winds and are very fast. If you consider buying an inflatable sea kayak, you should probably have a look at folding kayaks as well.

Sprint kayaking is another subcategory and kayaker in this field are the most demanding. In order to reach the best performance regarding speed they are very slim and long designed. In this field hard shell kayaks are highly recommended instead of inflatables. They offer no space for any luggage because any additional weight would reduce the speed.

For ambitious touring paddlers there are few models on the market, which can really compete with solid kayaks. For everybody else, who is looking for a good touring kayak for smaller and bigger tours, inflatables can be a good choice. Many inflatable models can be called allrounders because their use is not only limited to touring.

There are also uses where making long distances is not important at all. Fishing is one example for that kind of uses. Anglers make often short distances only and rest for most of the time with their boat for fishing at the same place. Of course, you can’t compare a kayak with an actual fishing boat but for flat water where boats with motors aren’t permitted, fishing kayaks are unbeatable. In addition to that, a kayak can be a great option for anglers with a smaller budget since there are already quite affordable inflatable kayaks on the market.

Advantages and disadvantages of inflatable kayaks

If you want to have an extremely practical kayak to take it just everywhere you want, then an inflatable is the right choice for you. This applies also to everybody who has neither the space to store a large hard shell kayak nor a car to transport it. In this case, an inflatable kayak is the only option. If you have enough space at home and a car, then a hard shell kayak can be a consideration. They are more robust which results finally in a higher durability and they are better performing on water.

Sometimes the question is raised if a folding kayak isn’t a good alternative either and indeed it is. For folding boat you need to stretch the boat skin over a frame of rods. The assembling is for a folding a way more complex and requires more time. Therefore, folding kayaks offer a better stiffness and better performance on the sea, as well as on lakes and calm rivers. Nevertheless, most of the inflatable kayaks are lighter than folding kayaks. In addition to that, folding kayaks are normally also more costly.

How much costs an inflatable kayak?

Entry-level models can be already found for under $100. Manufacturers like Intex or Sevylor are dominating this market in particular. These kayaks are made for occasional paddlers and for everybody who wants to try out this hobby and to see if it fills you with enthusiasm. What you can’t expect at this price is a high quality kayak with a great workmanship and performance on the water. They are designed for little tours and to relax on the water but not for white water paddling. 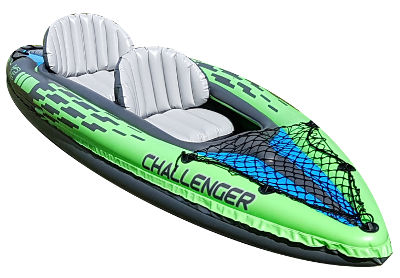 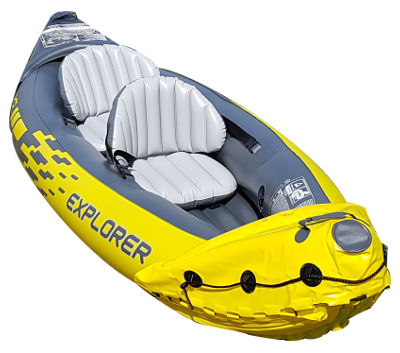 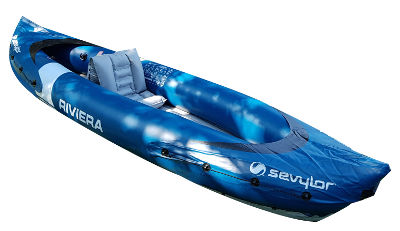 With a cheap kayak you will easily reach the limitations if you are planning to go paddling on a regular basis and to make longer tours. In this case you are better of to invest a bit more in your kayak. For more money you get definitely more value. Thanks to the better workmanship and used materials it is possible to inflate them with a higher pressure. An inflatable boat with a higher operating pressure leads to a better performance. In this segment you find the higher quality boats from Sevylor and the inflatable kayaks from Advanced Elements or Aquaglide. Especially Advanced Elements and Aquaglide have a really good reputation.

Especially if you are used to paddling hard shell kayaks then inflatables from Advanced Elements, Gumotex or Aquaglide have probably models that will satisfy you. They are really robust, have a high finishing and as said their performance on the water is comparable to hard shells. In this segment you should be ready to invest at least $1000 or more. Therefore, you get a boat, which is perfectly made for longer tours with luggage. 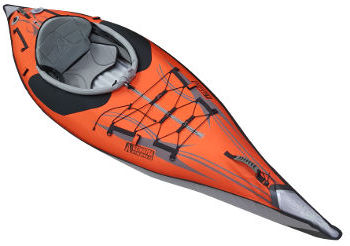 An inflatable kayak offers a plenty of possibilities to discover the nature in a different way without any big logistical effort. In contrast to hard shell kayaks, beginners have already the possibility to start with a small budget. However, you need to keep in mind that those entry-level kayaks can’t compete with high quality inflatables regarding finishing and performance. If you have the budget and if you already know before that you are going to make long tours or paddle on running rivers, then you are should think about getting a kayak from Advanced Elements or Aqualight straight from the beginning. 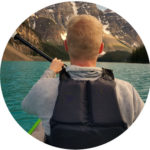 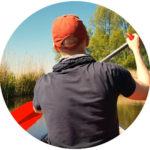 We, Christian und Sebastian, are behind Paddelventure.com – the first place for paddle beginners and enthusiasts. Whether on lakes, rivers or coastlines, we take you with us on our paddle tours and share our know-how in this area. During this season, we are paddling with kayaks from Advanced Elements. 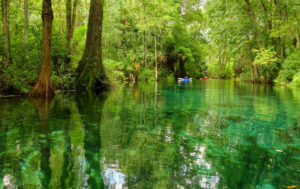 Kayaking at the Silver Springs State Park in Florida 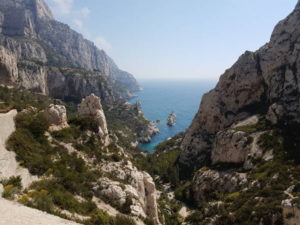 Kayaking through the Calanques National Park in South France 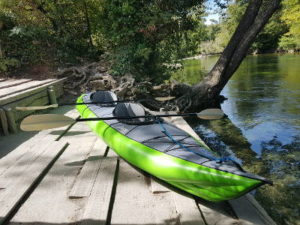 Why an inflatable boat? 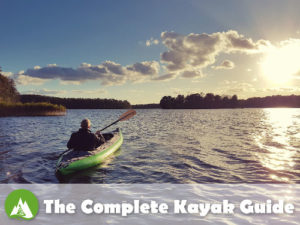